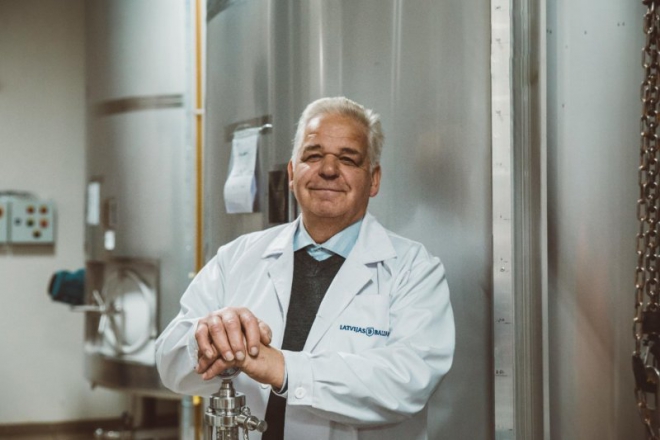 I have been working at Latvijas balzams since October 14, 1974, and we celebrate that date yearly. I have now spent 44 years with this able team. I was working in the liqueur workshop from my first day here, but it took about 20 years before I could call myself a liqueur master.

I have had the honour of working with distinguished masters, including Maiga Podrasniece (Maiga Podrašniece), who restored the recipe of Riga Black Balsam®, as well as people who were working here and making balsam before the war, like Stanislavs Taraskevics (Staņislavs Taraškēvičs). Making this legendary brand is certainly a team effort, spread out over many decades.

What urged you to apply at Latvijas balzams?

Life consists almost entirely of coincidences. I started studying agronomy in 1973, found myself here in 1974. Continued to study food technology by correspondence. Got married around that time, needed a job. My father-in-law worked at Latvijas balzams. So you could say it’s a family tradition.

What were the main lessons from other masters while you were still an apprentice?

Honestly, there’s no single main thing. One of the most important aspects of creating any beverage is preparing the infusion. That’s what I started with. All the stages of creation are important; it would be hard to single any of them out.

Latvijas balzams has a long history. Even longer for Riga Black Balsam®. How important was keeping traditions? What about creativity?

I think it’s a very significant point, that throughout all this time we’ve managed to preserve the Riga Black Balsam® recipe, as it was from day one. In Soviet Union times it was made from natural ingredients, and we held onto this principle. The ingredients of the beverage have not changed since I started working here. What has changed with time, though, is technology. We’ve reworked filtration, thus improving the overall quality of liqueur.

How about work ethics in this line of work? Do you need a special attitude towards your work?

If we’re talking about work ethics, obviously you can’t drink the liqueur while working. Well, outside the demands of production. Of course, you have to test if the flavour qualities are according to standards. We have our weekly tastings, where our tasting committee addresses these issues, if any appear. Sometimes we also have non-routine tastings. Some may find it bizarre, seeing several employees of a running business tasting liqueur at 11 a.m., but that too is a part of our work and culture. It’s also a necessity.

Do you need a special attitude while working at Latvijas balzams?

That’s certainly true with any job, not just at Latvijas balzams. I believe any man should do the work they like. I can certainly say that about myself. I love my job. It may sound a little weird, but I wouldn’t know what else to do. I also receive a lot of satisfaction from our successes and the appreciation of others. I’m satisfied with Riga Black Balsam® Currant. I think it’s a very successful product.

How would you value the significance of Riga Black Balsam® amidst other liqueurs from Latvijas balzams?

It’s a classic and something exclusive at the same time. Other beverages come and go. Our beverage assortment has been huge. In the 90s we created more than 20 new beverages in a single year. The total recipe count might be over 300. I did a radio interview in 1998, during Jāņi (Summer Solstice), and we counted 100 new beverages produced by the company at that point in time. Each of those had its lifespan, they took their place and then left the market. Riga Black Balsam® recipe doesn’t change. We hold to that. It has its own value. I believe it will last forever.

Here’s an interesting fact – during the Soviet Union times each Soviet Republic made their own balsam, it was a competition. Riga Black Balsam® served as the standard, they were all measured against it. That’s another acknowledgement of its uniqueness.

Has it been hard to produce a liqueur for more than 265 years?

Nobody knows all the details of its history, but a research shows that the creator of Riga Black Balsam®, alchemist and pharmacist Abraham Kunze, produced and distributed outside official Riga borders, to avoid taxes to the city. Then the empress of Russia Catherine the Great gave this balsam her protection. In Soviet times, Chairman of the Council of Ministers Kosygin decreed an increase of Riga Black Balsam® annual production to 400 000 decalitres. The usual yearly amount was 100–150 000 decalitres. Sovkhozy (Soviet state farms) at Ligatne (city name – red.) and Bauska (city name – red.) started growing raspberries, production of other roots and herbs was also increased, a new production unit was built – it’s a warehouse now. Times changed, there was Gorbachev’s prohibition, but Riga Black Balsam® annual production never fell below 100 000 decalitres.

What helps to maintain interest in producing Riga Black Balsam® all these years?

My interest in making this liqueur is kept alive by traditions and working with our own hands. We still do that. That might be one of the things we stand out with. There are not that many factories with that much manual labour. The world aims at reducing production expenses. Well, maybe it doesn’t apply here. Although this work might be impossible to automate.

What has been the main keeper of the bitter flavour for these more than 265 years?

The bitter flavour is kept and ensured by the botanical infusion. The Gentian root is one the most bitter herbs in the world. It used to be grown in the Alps only. There’s also wormwood and bogbean. All the bitter botanicals have been kept in the recipe. It has a pronounced herbal taste of various botanicals. The balsam is bitter, slightly harsh. Sufficiently hard, with a good flavour balance of botanicals and other ingredients.

In recent years your company has been producing various versions of Riga Black Balsam®, including Currant and Cherry. Is the creation of something new and non-traditional inspiring and motivational for you? Do you also attempt to create something entirely different, or do you focus on new products that are strongly rooted in tradition?

Our new Cross Keys Gin is a good example of new product creation that overlaps with passing on the torch of tradition. Even though the product cost is significant, it’s still very successful. It’s the first premium gin we have started making in Latvia. It certainly supplements the special mission of its older cousin Riga Black Balsam®. It strengthens the story of Latvijas balzams as the largest beverage producer in the Baltics and most steeped in tradition. It’s also made from many natural ingredients and bottled in clay.

We’re still testing it, researching the behaviour of gin in clay bottles, if there are any subtle changes in flavour. Clay is a living natural material, the drink breathes in it. Likewise, Riga Black Balsam® also breathes and undergoes a subtle process of transformation in its clay bottles. That too can be considered a continuation of the old values. As in the balsam, the gin too sees many natural botanicals added to it, 17 of those it has in common with Riga Black Balsam®. We also added juniper berries, essential for gin, chamomile and linden blossoms, fitting for Latvia and the Baltics, as well as rosemary for a bit of poignancy.

Whether you look at producing beverages from the angle of creating new products or continuing deeply established traditions, I should emphasize again, this is done by a large and experienced team. Producing a single beverage involves countless departments and so very many specialists. As a liqueur master, I’m merely a small part of that mechanism. With the team we currently have at Latvijas balzams, we certainly will continue making Riga Black Balsam® for the next two hundred years, along with making new and promising brands!